What are roles for?

Roles ensure the continuity of a business process when someone responsible for a certain stage sick, on vacation, traveling, or otherwise absent. In this case, instead of a specific employee, a role is appointed for this specific stage, which is performed by this employee and his or her substitutes.

Roles are also useful for processing incoming requests by a group of interchangeable employees. For example:

A role is similar to an ordinary user. You can assign tasks to a role and use it in your workflows. Each role participant receives a task in their Inbox, and when at least one of them approves or declines the task, it is forwarded to the next stage. For instance, the first available manager processes a customer request and forwards it for further evaluation by the project team.

One user may participate in several roles.

The list of roles within an organization can be found on the User Management page.

The Roles section may only be accessed by the supervisor — the person who has registered your organization with Pyrus — and the users to whom the supervisor granted the right to Change Roles.

Roles can be used to configure workflows. When assigning responsibility for a task at a specific stage, you can chose either a user or a role: 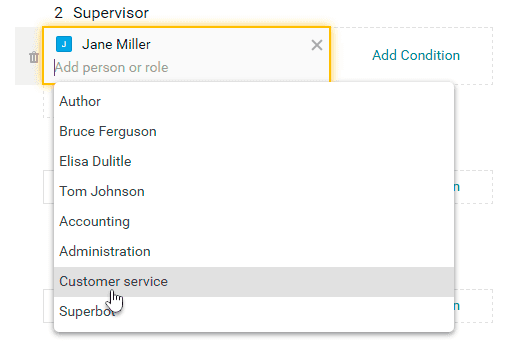 You can create an unlimited number of roles within your organization.

To create a role, click New Role in the Roles Section of the User Management page. Enter the role name, then click Save. 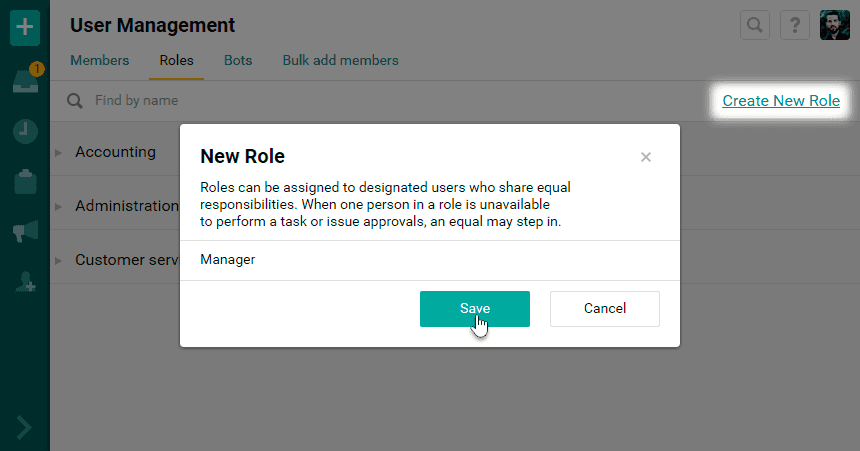 Select which employees from the list you want to designate to the role. If you want to add several users to the role, click Bulk add users and paste their emails there.

Now you can use this role for configuring forms and workflows, and request role approval within the tasks.

Note: The maximum number of roles depends on the number of users in the organization.

Up to 500 participants can be added to a role.

Companies change and evolve. When employees are transferred to other posts or the company structure shifts, it it will likely be necessary to update the list of role participants, or to perhaps delete a role entirely.

Select a role in the Roles section of the User Management page.

You can also remove participants from a role on their Profile pages. 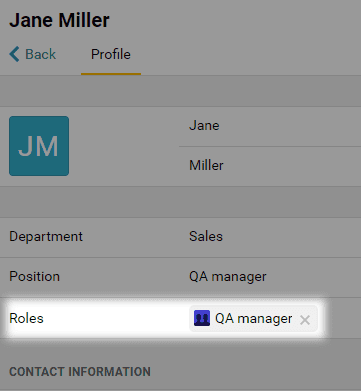 Note: if you delete a role, you can’t undo it.

How to leave a role in another organization

If an employee participates in a role at another organization, it’s noted on the Profile page.

If you were added to a role by mistake, for example, you would click the “x” button near its name to leave it, then confirm the action. 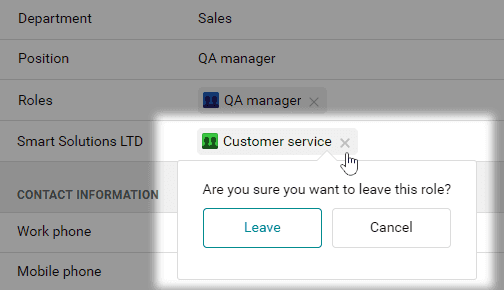