Let’s talk more about Pyrus functionality in the Processes settings. Sometimes you’ll have multiple employees who serve the same role. We’ll see what we can do if we have several employees in the same position, a position that can be replaced with others who have the same role. There’s actually a special mechanic for this, and to no one’s surprise, this functionality is called ‘Roles’.

To maximize your efficiency with a project, any task-free engineer should take the incoming query. But as a project manager, wouldn’t that mean having to remember everyone’s work schedule? That seems pretty time-consuming. What about Pyrus, can the system can figure out which one of them is free?

Yes, it can. We can do this by using the Workflow Roles to create a separate role for ‘Engineer’ and add in all employees of that position. Let’s see how to do that.

At first we open the Workflow Roles editor: 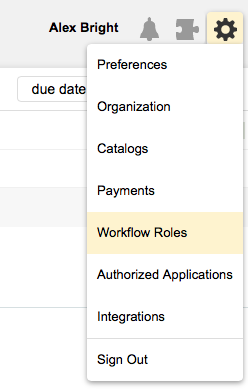 Here we choose to ‘Create new role’. Add a title and a list of members, then save:

After its creation, the role becomes a fully functional part of the system. For example, there are two roles in that list: Engineer and Manager. If any stage of the workflow should be closed by a role, then the task will go to all the members of that role. In addition, as soon as someone approves it, the task will be moved further to the next stage. The same situation persists when you add a role as an assigned person.

To figure out, if the task was assigned just to you, or to the role itself, you can choose an option right in your inbox: